Since World War II, the United States has led the world in developing cutting-edge technology. A dynamic private sector, skilled workforce, and leading universities have kept America at the innovation frontier for decades.

But U.S. policymakers have grown complacent, resting on the success of the Cold War model without maintaining or modernizing it. The United States should focus on three areas to reaffirm U.S. technological leadership: investing in innovation, protecting critical technologies, and championing data governance. 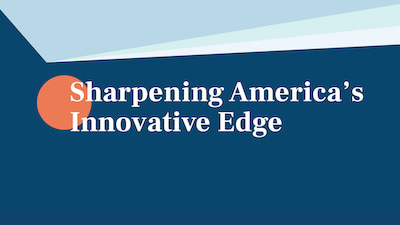 The United States spends more than any other country on R&D. But as other countries invest in their innovation capacity and production of critical technologies, U.S. R&D spending has dropped to pre-Sputnik levels.

Human capital is also an essential ingredient for innovation. The U.S. innovation system relies on training and attracting the best minds in the world. To complement domestic talent, the United States attracts highly skilled international students, scientists, and entrepreneurs.

While investing in innovation, policymakers should seek to ensure that sensitive technology developed by that investment does not flow to adversaries. The United States must balance protecting national security, working with allies, and minimize disruptive impacts to the U.S. domestic economy and commercial sector.

The United States cannot remain the global innovation leader without engaging in global digital rulemaking. It is not enough to invest at home and protect sensitive technologies. If America does not step up in discussions on the rules, standards, and norms that govern data privacy and digital trade, others will. This could create a balkanized world with competing governance regimes that disadvantage U.S. companies and the U.S. economy in a vital growth industry.

More about the
Recommendations